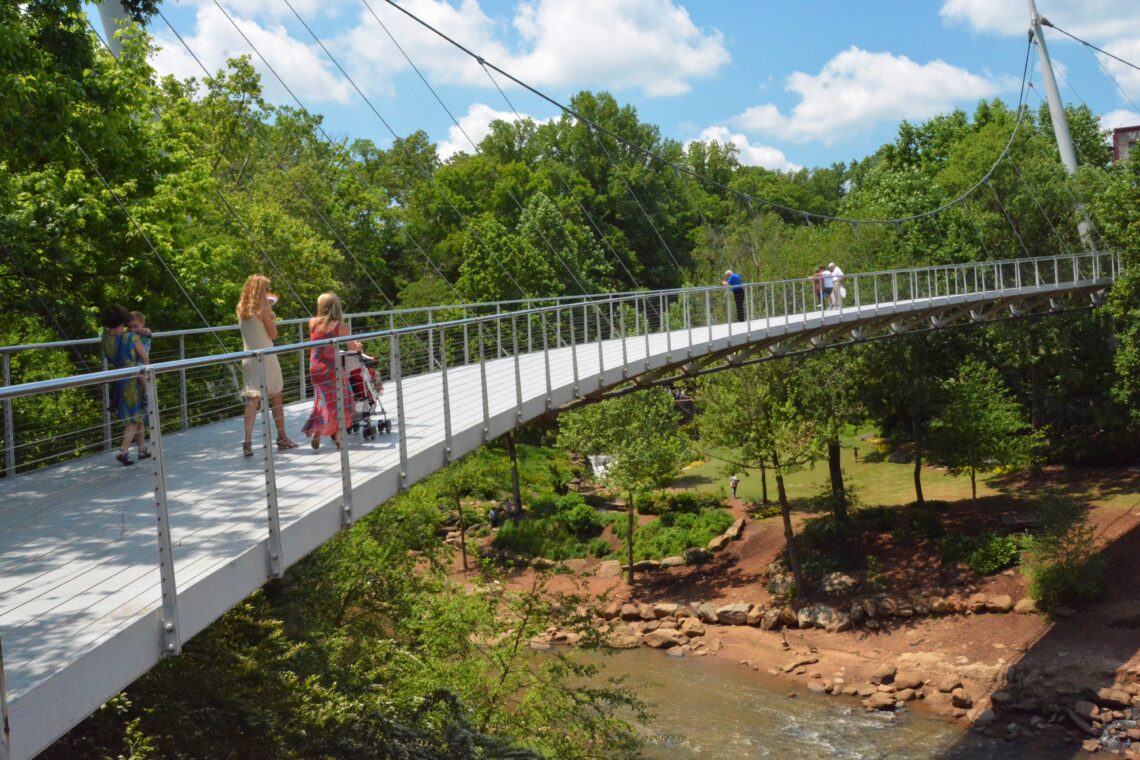 Greenville replaced an eyesore with the graceful Liberty Bridge.

As trails succeed, they increase business activity, employment, wages, property value, income and, importantly, tax revenues in a self-reinforcing upward spiral. Specifically, trail improvements boost trail use which grows trail-adjacent businesses and property investments which, in turn, expand tax revenues and create public support for further trail improvements. By riding the Swamp Rabbit Trail in Greenville, South Carolina, my wife and I got a first-hand look at this virtuous cycle.

Over the past four decades, Greenville, South Carolina, transformed its declining core into a vibrant downtown encircling a park complex created from an abandoned industrial zone. The city wisely threaded this park with multi-use pathways and eventually linked this network to the 17-mile Swamp Rabbit trail plus several other greenways. Today, this system connects residential neighborhoods with schools, parks and cultural attractions throughout the city and its suburbs. Although the Greenville Health System supported this trail primarily to promote active transportation and healthy lifestyles, the Swamp Rabbit Trail is also good for business.

The revitalization process began when Greenville put its Main Street on a diet, reducing the roadway to two lanes and expanding the sidewalks to create a more pedestrian-friendly environment and accommodate outdoor dining. Next door, the city reimagined the Reedy River, replacing a concrete vehicular bridge with the sleek Liberty Bridge, a curved 355-foot suspension bridge for cyclists and pedestrians. The surrounding area opened as Falls Park on the Reedy in 2004 and quickly became the recreational/cultural heart of the city. On the east bank of the river, a public-private partnership built the theater/concert hall complex known as the Peace Center. Next door, an upscale restaurant moved into a retooled industrial building dating from the Civil War (Greenville 2018).

Heading south and east from Liberty Bridge, the Swamp Rabbit hugs the bank of the Reedy River and passes a jet on display at the war memorial honoring Rudolf Anderson, a Greenville native whose spy jet was downed during the Cuban Missile Crisis in 1962 (Greenville 2018b). Entering Cleveland Park, cyclists can break for a walk around the Greenville Zoo, which is relatively small but nevertheless features all the favorites including lions, monkeys and giraffes. Heading further south, the Swamp Rabbit reaches 13,000-student Greenville Technical College and ends, for the time being.

Across the Reedy River from the Peace Center, developers converted a parking lot into RiverPlace, a complex that mixes residences, hotel rooms, offices and restaurants overlooking the park, the Liberty Bridge and the waterfall that was the birthplace of Greenville (Greenville 2018). Within this complex, visitors can rent a bike from Pedal Chic and use the Swamp Rabbit Trail’s underpasses to avoid downtown streets. Before long, many cyclists take a break at the Swamp Rabbit Café and Grocery, which specializes in locally-sourced food. This is just one of several businesses that have not only located along the trail but also named themselves after the trail including the Swamp Rabbit Brewery, the Swamp Rabbit Inn and even Swamp Rabbit CrossFit. A bike lane also takes fans close to the home stadium of the Swamp Rabbits, Greenville’s professional hockey team.

Seven miles from downtown, the Swamp Rabbit skirts the campus of Furman University. Many cyclists choose to detour onto Furman’s pathways to explore the 800-acre grounds, recognized for outstanding landscape architecture. The curious can check out a replica of the cabin where Henry David Thoreau lived for two years and wrote his classic book Walden. The hungry can patronize any of four different restaurants in the student center overlooking the bell tower surrounded by Furman’s Swan Lake.

Further north, the Swamp Rabbit enters the City of Travelers Rest, which got its name in the early 19th century when people needed to prepare for ascending or to recover from descending the Blue Ridge Mountains (Traillink 2018). By the mid-2000s, this city of 4,500 people had become a little too restful, with vacant buildings indicating a languishing economy. After the Swamp Rabbit opened, entrepreneurs soon realized that the trail was a hit and that growing numbers of cyclists, joggers and walkers were working up an appetite on their way to Travelers Rest. Today this stretch of the trail is home to more than a dozen restaurants and brewpubs serving everything from sushi and pizza to crepes and tacos. Establishments that predated the trail also renovated, like the Whistle-Stop at the American Café which serves its railroad themed goodies in an actual 1932 whistle stop crammed with railroad memorabilia. As one of the owners of The Café at Williams Hardware stated about the Swamp Rabbit: “It has really been an economic boon, not just to Greenville and Travelers Rest but to the whole county” (Stark 2016).

In 2014, a study conducted by a Furman University professor documented some of the economic benefits generated by the over 500,000 people who used the trail in the prior year. Entrepreneurs opened seven new businesses because of the trail. Bike shops and restaurants near the trail saw revenue rise between 10 to 85 percent, with some stores reporting income growth as high as $400,000 (Reed 2014). Of the total number of people on the trail, one quarter were tourists and injected $6.7 million into the local economy in 2013 (Maxwell 2014).

Communities surrounding Greenville are eager to connect to Greenville’s trail network. The Swamp Rabbit already extends a mile north of Travelers Rest on its way to with Slater-Marietta. To the southeast, the communities of Maudlin, Simpson and Fountain Inn are planning extensions to Greenville that would also link to the existing six-mile trail that winds through the Conestee Lake Nature Park.  These are all indications that the success of the Swamp Rabbit Trail is inspiring a trail building boom in the Blue Ridge Mountains of South Carolina (Stark 2016).