Deciding on whether to join my husband Sven on a work trip to attend the Ecocity World Summit in Melbourne, Australia this summer, a handful of pros outweighed the cons rather quickly – among them being the opportunity to explore the world’s most livable city (as it’s been designated since 2011) on a continent neither of us had yet to visit. And then there was the chance to see former Vice President Al Gore present a keynote.

Before we left San Francisco, a pre-summit update posted to the event website told me this was going to be a unique experience. Organizers “decided that rather than provide a gift” to presenters “that was at worst unsustainable and at best unmemorable, the Summit would collaborate with Melbourne Water and local volunteer conservation groups to regenerate wetlands and riparian areas along the Maribyrnong River.” Imagine if all conferences producers chose beneficial community impact and collaboration where their events are held. Let’s allow that idea to simmer for a while…

Over three days more than 900 delegates from 30 countries were gathered for three days to partake from a selection of 300 sessions from three tracks: Urban Leadership, Academic Research, and City Practices. The program was overwhelming. Highlight sessions I attended were about redefining “progress and transition from an economy based on quality rather than quantity,” urban gentrification and its effects on seniors, the culture of economics, impacts of food waste in Melbourne, and “creating sustainable everyday practices in our cities.”

Al Gore’s plenary session was the morning of day two. At the outset of his talk he asked three questions: Must we change? Can we change? Will we change? He proceeded to answer them in the course of his hour-and-a-half-long slide and video presentation which I’m guessing to be the basis of his new film, “An Inconvenient Sequel: Truth to Power.” (I’ll be seeing it next week.) Attendees were taken on an emotional and confrontational journey that ran the gamut of sobering, devastating, amusing (the guy’s got a good sense of humor), and as promised from the beginning, positive and hopeful by the end. He concluded with a concise yet powerful message that applies to all of our choices and actions:

“The will to change is itself a renewable resource.”

The many sightings and encounters encompassed by the “will to change” and sustainable practices that we would see or experience during our urban meanderings before, during, and after the conference made me applaud as I did when Mr. Gore’s talk ended. Unlike the majority of his slides, however, the following images are uplifting.

It all started near St. Kilda Pier where I spied a water bottle refill station (not just a fountain) and ate most exquisite orange egg yolk I’d ever seen. I actually asked the waitress if they “did” anything to their eggs. As plain as day she said they didn’t. It was free range. That’s what they serve. My conclusion: the local chickens are very happy!

I oohed with joy when I saw paper (paper!!!) straws on the counter at Batch, a cafe in Balaclava, and at Aunt Maggies, an organic grocer, in Fitzroy. Come to think of it, I do not believe we were offered or served a single straw while dining out in Melbourne. 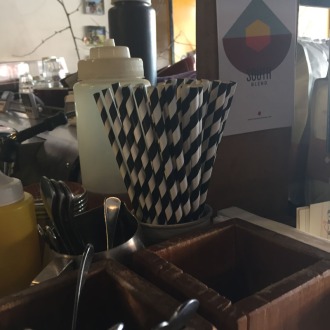 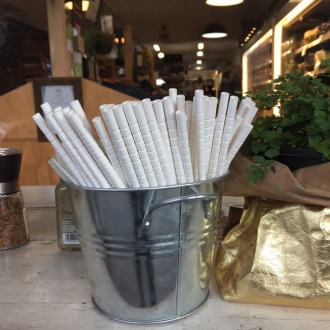 Upon seeing the words “bulk foods” on the sign from across the street, we jaywalked to peruse Source, a bulk food-only store with locations throughout the Australia. Back at Aunt Maggies, a posted sign stating they are phasing out plastic bottles, was a powerful environmental commitment by a small independent retailer during Plastic-Free July.

This particular Aunt Maggies location was a 10-minute walk from the apartment we stayed in, and it became our grocery go-to place during our post-conference time in Melbourne. We loved the bring your own or buy an egg carton options. When not wanting a carton, you do what Sven did: carefully carry eggs home in your jacket pocket. (All survived intact!)

I wish we had the opportunity to taste the bulk wine from ReWine at Queen Victoria Market, but it was too early in the morning… 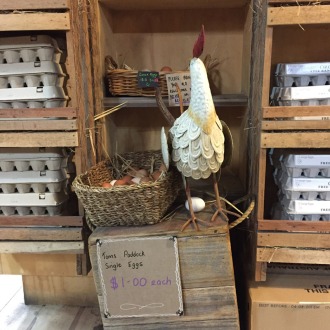 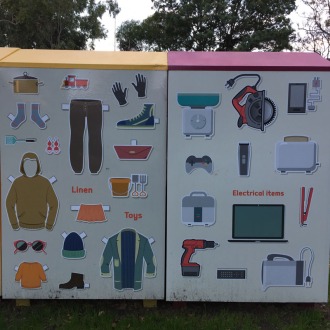 We had a rainy but fun visit to Ceres Community Environment Park, a destination two people we spoke with at the conference – one local and one from Rio de Janiero – suggested we visit. Their chickens were chattering away. At the onsite organic grocery store, I loved the the positive messaging on tissue boxes by Who Gives a Crap, a disposable paper product company with an amazing mission and a really fun website! 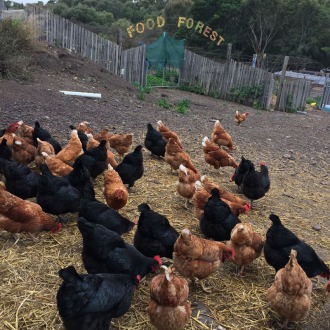 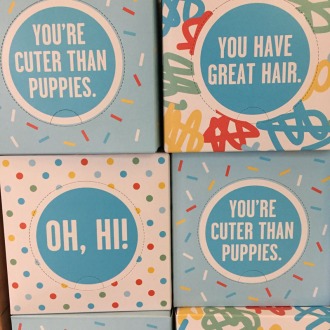 We came upon Friends of the Earth Food Co-op and Cafe at closing time and missed a chance to check out their offerings and talk to staff. Their window impressed me with the timely messages for Plastic-Free July and beyond! Come to think of it, I don’t recall seeing a single public mention of this annual challenge in San Francisco before or after my trip. (What’s up with that SF?)

And looking back to my very first and insanely jet lag-filled day in Melbourne, I have a hunch professional organizer, Lissanne Oliver, thought I was nuts when I got all excited about a repurposed refrigerator near a rail station. It was a free lending library, and I had to peruse the “cool” offerings.

Melbourne is a city where diverse and visible efforts by individuals, small businesses, and the local government are making statements and strides toward greater sustainability each and every day. In addition to the enviro-geeky moments captured above, it was also awesome to ride the efficient and extensive public tram system that will soon be powered by 100% renewable energy and meander car-free pedestrian and bicycle paths and bridges downtown. The urban experience is a different thing when you can literally hear the human cadence and conversation that is often drowned out by vehicular noise.

I came home inspired to continue an underlying mission to inspire and provoke  awareness and positive change. Engaging in conversation, exchanging ideas, and witnessing the power of simple messages are soul-filling. So are the small steps each and everyone of us can take right now. Where will you begin? You need not travel very far!

Debra Baida, founder Liberated Spaces®, is a life organizer and coach based in San Francisco. She has been a San Francisco Green Business since 2008, and is the former leader of the National Association of Productivity and Organizing Professionals’ Environmentally Conscious Organizers Special Interest Group. She has appeared on KQED’s Forum and PBS NewsHour, been a guest lecturer at Stanford’s d.school, and been featured in numerous publications.