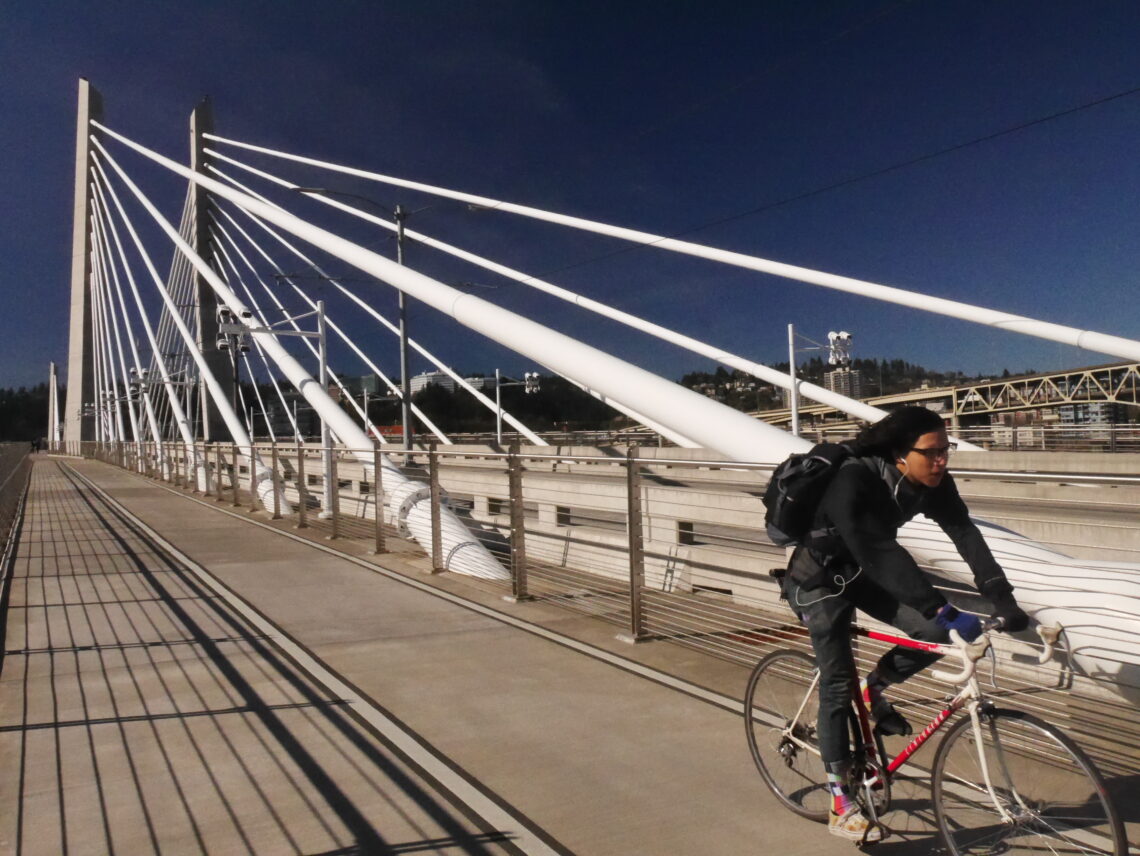 As trails succeed, they increase business activity, employment, wages, property value, income and, importantly, tax revenues in a self-reinforcing upward spiral. Specifically, trail improvements boost trail use which grows trail-adjacent businesses and property investments which, in turn, expand tax revenues and create public support for further trail improvements. By riding the trails of Portland, my wife and I got a first-hand look at this virtuous cycle.

Portland and Oregon are well known for leadership in sustainability in general and bicycling in particular. Some people wrongly assume that people here are making sacrifices for the good of the environment. But experts calculate that the savings reaped by reduced car dependency create a stronger local economy as well as cleaner air, better health and greater enjoyment of beautiful natural surroundings.

Not surprisingly, Portland’s love affair with bicycles started long ago. The 1903 Olmstead Plan proposed the 40-Mile Loop, a greenway connecting parks and other destinations while encircling much of what is now a metropolitan area with over 2.7 million people. Over the last 100-plus years, Portland has made much of that dream a reality. A big step toward completion came in 1990 when the city acquired most of the right of way for the Springwater Corridor, now a 21.5-mile path inducted in the Rail Trail Hall of Fame. Connecting with the East Esplanade Trail at the edge of downtown, this trail follows the Willamette River and Johnson Creek through Portland neighborhoods, natural areas and farmland to the City of Gresham, which explains why it attracts 1.2 million users per year (40-Mile Loop Land Trust 2019; Rails-to-Trails Conservancy 2011).

Portland’s downtown Esplanade Trail links with the Springwater Corridor, part of the 40-Mile Loop envisioned in the 1903 Olmstead Plan.

Other completed and planned portions of the 40-Mile Loop pass 33,000-student Mt. Hood Community College, several parks along the shores of the Columbia River and the Portland International Airport before circling the 2,000-acre Smith and Bybee natural area, one of the country’s largest urban freshwater wetlands and home to numerous species including bald eagles, beaver and painted turtles. After crossing the Willamette River on the historic St. Johns Bridge, loopers can park their bikes and hike the 30-mile Wildwood Trail that meanders through Forest Park, a logged-and-abandoned mountainside that today stands as living proof of Portland’s commitment to the restoration and preservation of nature (Pruetz 2009).

Returning to downtown, the 40-Mile Loop enters Tom McCall Waterfront Park, created when Portland and Oregon removed Harbor Drive in 1974 and replaced it with a green space that now serves as the city’s front lawn. Today this park is home to several festivals including Portland’s Rose Festival, the venerable celebration held every June since 1907. From Waterfront Park, bridges cross the Willamette River to the Eastbank Esplanade, effectively creating a 2.5-mile inner loop. One segment of the Esplanade is formed by a 1,200-foot long floating bike/walkway, the longest one of its kind in the United States (Portland Parks & Recreation 2019). From the Esplanade, bikeways radiate east to several destinations including the Oregon Convention Center and Moda Arena, home court for the Portland Trailblazers and home rink for the Portland Winterhawks.. 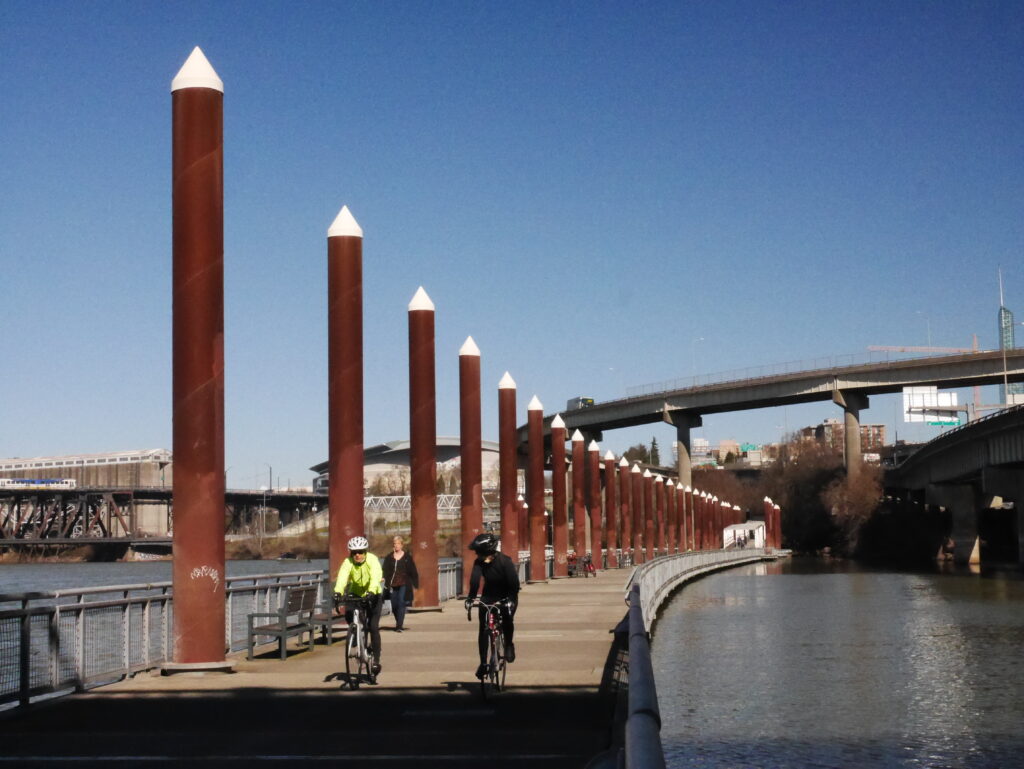 Portland’s 1,200-foot long floating bike/walkway is the longest one of its kind in the United States.

The planned 40-Mile Loop has expanded to more than 140 miles throughout Multnomah County, connecting to more than 30 parks (40-Mile Loop Land Trust 2019). Portland alone has built 365 miles of bikeways, including 85 miles of paths and over 35 miles of infrastructure physically separated from car traffic. In response, between 2000 and 2017, commuting by bicycle here increased up by 374 percent. Today over 6 percent of commuting in Portland occurs on bicycles, the highest proportion of any large city in the nation. In recognition of these accomplishments, Portland is the only large US city to receive a bicycle-friendly community rating of ‘platinum’ from the League of American Bicyclists (League of American Bicyclists 2019; Portland Bureau of Transportation 2019)

The local economy benefits in many ways from its emphasis on bicycling. Portland’s Green Dividend refers to the fact that the less people drive, the less they spend on driving and the more money they have to spend on other things. According to a 2007 study, since Portlanders drive 20 percent less than average Americans, they have an extra $1.1 billion in their pockets. Furthermore, reducing expenditures on cars and gas (which primarily leave the state), this $1.1 billion has a better chance of being spent in economic sectors with higher local multiplier effects including restaurants and brewpubs. Of course transit, walking and compact development as well as bicycling account for Portland’s lower auto-dependency. But together, the green dividend concept suggests that Portland’s economy is strong because of, rather than despite, its sustainability successes (Cortland 2007).

Vying for a piece of the Portland Green Dividend, developers here are designing buildings geared predominantly to cyclists, such as a multi-use building with housing above a brewpub on the North Williams Avenue bikeway which features bike storage instead of any dedicated car parking. Businesses are attracted to bikeways because cyclists can easily make multiple stops, particularly when convenient bike parking is available in the form of a bike corral replacing a car parking space that was previously located in front of a store or restaurant (Pruetz 2013). As one measure of the popularity of bicycle-supported business, Portland has installed over 6,000 bike racks in public rights of way, including 158 bike corrals requested by adjacent businesses who understand the rewards of catering to cyclists (Portland Bureau of Transportation 2019).

Even in bicycle-friendly Portland, some business owners resist eliminating on-street parking for bike lanes or bike corrals. However, surveys of customers at Portland bars, convenience stores and restaurants find that cyclists spend less per visit than motorists but tend to visit more often and consequently spend almost 25 percent more per month than their car-driving counterparts (Clifton, Morrissey & Ritter 2012).

Oregon offers more than 525 miles of bicycle trails including the 109-mile long OC&E Trail and the Row River Trail, part of the Covered Bridges Scenic Bikeway (Rails-to-Trails Conservancy 2019). The state recognizes the economic importance of bicycle-related travel on these off-road trails as well as its robust network of bicycle routes. One study estimated that traveling cyclists spent almost $400 million in Oregon in 2012, supporting 4,630 jobs with a payroll of $102 million and tax receipts of almost $18 million. Within that total, the Portland metro area captured $89 million in spending, accounting for 700 jobs, $18.7 in earnings and $4.1 million in state and local tax revenues (Dean Runyan Associates 2013). Consistent with these statewide findings, the Historic Columbia River State Trail alone was found to attract 730,000 cyclists annually, resulting in over $21 million in spending and 273 jobs (Dean Runyan Associates 2014).

Portland’s 1903 Olmstead Plan stressed interconnectedness as essential to building a world class park system. Over the intervening 116 years, Portland gradually assembled a 365-mile network of bikeways, including a regional-scale loop linking residential neighborhoods, civic institutions, schools, jobs and businesses as well as parks. That connectivity goes a long way to explaining why Portland is usually ranked as the top US cycling city and achieves a higher proportion of bicycle commuters than any other large American city. And inspirationally, Portland’s Green Dividend proves that cycle-centric lifestyles are good for local economies as well as health and happiness.