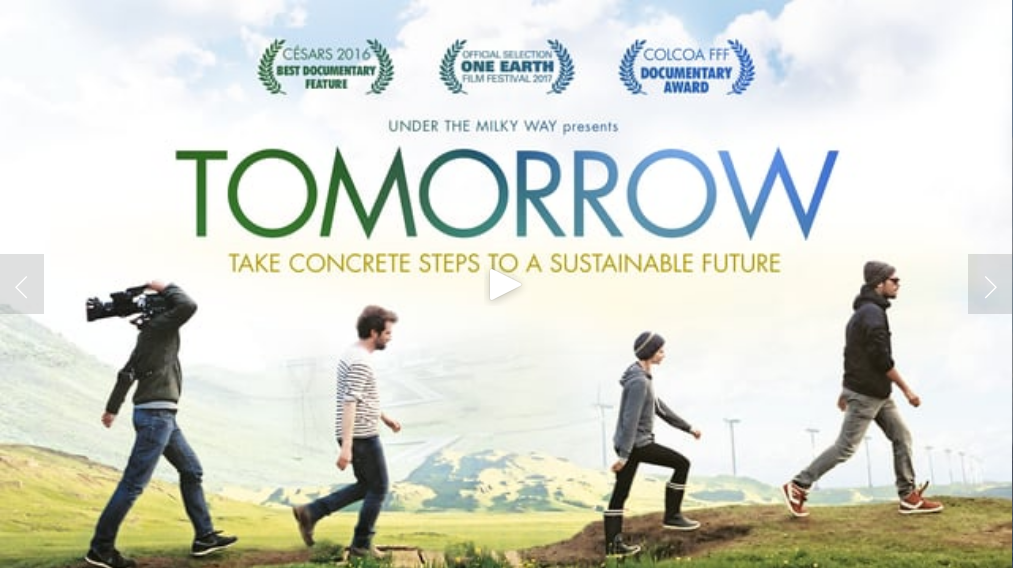 Those of us concerned about the planetary challenges of our time know the varying degrees of trepidation that can accompany a showing of yet another documentary attempting to address the world’s problems. There is, for one, the much dreaded gloom and doom screening that leaves you so overwhelmed and hopeless that you just want to shrivel up and disappear from the face of the earth. Then there’s the gloom-and-doom-plus-five-minutes-of-personal-action-bullet-points-at-the-end (Recycle! Eat less meat!) formula that’s supposed to leave you feeling empowered but the “solutions” offered are so general and clichéd that you forget all about them by the time you get through telling your friends how screwed we are.

In response, environmental documentaries in recent years have attempted to offer a more optimistic outlook, one in which the focus is on people doing something about a particular problem, with the obvious objective to make you leave the theater feeling like you could do the same thing or something like it in your own neck of the woods. While well intentioned, the do-good storyline carries its own risks: from the overzealous protagonist whose quest to live completely without this or that facet of modern day life makes for good entertainment (that you would never try at home) to the flowery salvation story following a subject’s miraculous transformation from problematic to resolved in 90 minutes, solutions-oriented documentaries gone wrong can come across as overbearing, preachy, or starry-eyed.

Tomorrow is one of those rare gems that not only dodges the various trappings of aspirational filmmaking with quiet elegance but it gently dispels the conventional wisdom that change must be brought about by someone more capable, ambitious, organized, or well connected than ourselves. Titled “Demain” in its original French version, the story follows French actress and director Mélanie Laurent (Inglorious Basterds) and her friend, activist Cyril Dion, around the world in search of concrete solutions to our fragile planet’s current unsustainable trajectory. Their “holy crap, this is bad!” moment is a study published in Nature predicting that humankind could disappear within the next century, but they get off on the right foot by not taking up much precious reel with the how’s and why’s of our looming demise. For Laurent, being a new parent is enough to look to the future with the urgency of now. And besides, the Sixth Extinction documentary has already been made.

With the acknowledgment out of the way that humans have done a total number on the planet, Dion, Laurent, and their crew set off on their journey to talk to the people who are doing things in ways that are more aligned with the Earth’s natural speed and complexity. We don’t know yet that the film will delve into the areas of food, energy, finance, democracy, and education, but there is something grounding about the fact that the first stop in the agriculture segment takes us through the abandoned industrial landscapes of Detroit. Listening to Malik Yakini and Kadiri Sennefer, Co-Managers at D-Town Farm, a seven acre organic farm that is part of the larger Detroit Black Community Food Security Network, pop the bubble on the romanticized notion of urban farming as a hip and sexy new thing to do is reassuring in that it sets the tone for the entire movie.

Yakini and Sennefer acknowledge that the practice of growing food closer to the people who eat it certainly checks off a number of hot button items on the save-the-planet list, but they point out that it’s first and foremost hard, unglamorous work that is as much if not more so about reclaiming access to and ownership of land for disenfranchised communities as it is about combating climate change or species extinction. The message, it seems, is that before you can even think about saving the planet you have to learn how to love getting your hands dirty. If you’ve come looking for silver bullets, this is not your flick, but if you’d like to find out more about how to move the needle spade by spade to power a transformation one community at a time, stick around for a while.

Speaking of powering things, after a couple more trips to a permaculture farm in Normandy and a Community Benefit Society in Todmorden, U.K. highlighting how a diverse network of small farms and community plots are quite capable of meeting most of the local food needs (70 percent of the world’s food is already grown by small farmers), a natural question arises: does the world really need industrial, fossil fueled agriculture? After a brief reminder by Dion that five of the six largest companies in the world are oil companies and an impassioned prelude by economist Jeremy Rifkin on how the infiltration of fossil fuels into almost every facet of modern life has led to unprecedented disruptions of the Earth’s climate and water cycles, we are off to the next series of living laboratories, this time on how to reduce our fossil footprint.

At this point in the film I’m really starting to groove on the soundtrack. The voice that has been weaving through the tapestry of these consequential subjects with Feist-like sweetness and Ani DiFranco-like feistiness belongs to Fredrika Stahl, a Swedish singer and songwriter based in France who I have a feeling we’ll be hearing a lot more of.

Stahl’s ode-to-action Pull Up Your Sleeves sets the mood as the camera introduces us to the renewable energy mavens of Copenhagen, Malmo, and Reykjavík:

Step by step we’ve gathered all the keys and now we’re standing at your door.
Now the time has come to give some back, we can’t keep taking anymore.
So what do we do now?
Pull up your sleeves, make a move, do something we need.

Once again, Tomorrow manages to tackle the segment in nuanced, multidimensional fashion. All too often, when people talk about energy all they can think of is solar panels and windmills. And sure, those are certainly a big part of the equation, but as someone very skeptical of one-size-fits-all technological panaceas without also significantly transforming our infrastructure, values and lifestyles, I applaud the filmmakers’ foray into the finer points of urban planning. As Jan Gehl, the great Danish architect whose simple but profound guiding principle is that cities are for people, elucidates in the Copenhagen clip, investing in human-scale infrastructure that prioritizes walking and biking not only solves congestion problems and reduces energy needs but also creates healthier people, a more vibrant social life, and by the way, is significantly cheaper to build than automobile infrastructure.

I’d be remiss to mention that Laurent and Dion also make a pit stop in my own stomping grounds of San Francisco, exploring how the city has been able to make the creation of zero waste its official policy and capturing this ambitious undertaking in practice. The main protagonist is the intrepid resource recovery champion Robert Reed, who shows us how his employer Recology closes the waste cycles between the city’s disposed goods, the company’s state-of-the-art recycling and composting facilities, and Northern California’s farms and vineyards.

About halfway into Tomorrow, the focus shifts from the physical aspects of the transition we need to the shift in consciousness necessary to reimagine how we want to live together with and on this planet. I mean transition quite literally, as my personal highlight in the next segment on economy is the interview with the ever-engaging founder of the Transition Movement, Rob Hopkins. There are now over a thousand transition towns in over 50 countries, including a few in my own backyard, using their own creative and cultural resources to build the kind of resilient communities that can be sustained beyond the age of fossil fuels, but the oldest ones in the U.K. including Hopkins’ original Totnes show just how profound the changes can be when these alternative ways of sharing physical and mental spaces are allowed to be explored and refined over time.

Hopkins’ explanation for why Totnes has a £21 bill (“Because you can, why not?”) may sound cheeky but cuts to the heart of the matter that money is just a mental construct. While we’ve let big financial institutions and corporations define the meaning of money in a way that allows the bulk of it to funnel in one direction (theirs, surprise!), a properly matured local currency like the Totnes Pound shows how much power We the People actually have to re-construct its meaning and flow to reflect a healthy human and ecological organism in which the greatest good is brought to the greatest number of residents. It’s important to note that re-envisioning money is not only an economic game changer but can really bring the “fun” back into the fundamentals, as Totnes’ neighboring transitioners demonstrate with their Brixton Pound.

Each paper Brixton Pound note commemorates a local hero, voted on by the people of Brixton, and celebrates their history, art, politics and culture.

Perhaps the most important and relevant aspects of the systemic changes needed and the logical next themes the documentary seamlessly transitions to — especially for an American audience — are Democracy and Education. I won’t give away too much, but suffice it to say that there are living breathing examples — from Iceland to India to Finland — of how we can build the kinds of civic structures and institutions that not only provide the foundation for a populace committed to changing ingrained assumptions about our physical conditions but that are replicable and scaleable enough as to be useful for future generations. And while the hope is that these local models will catch on everywhere tomorrow, Tomorrow clearly shows that we already have most of the solutions to our problems today.

Tomorrow has drawn over a million viewers in France and gave its debut in U.S. theaters to capacity audiences. For more info and showtimes, visit the website.