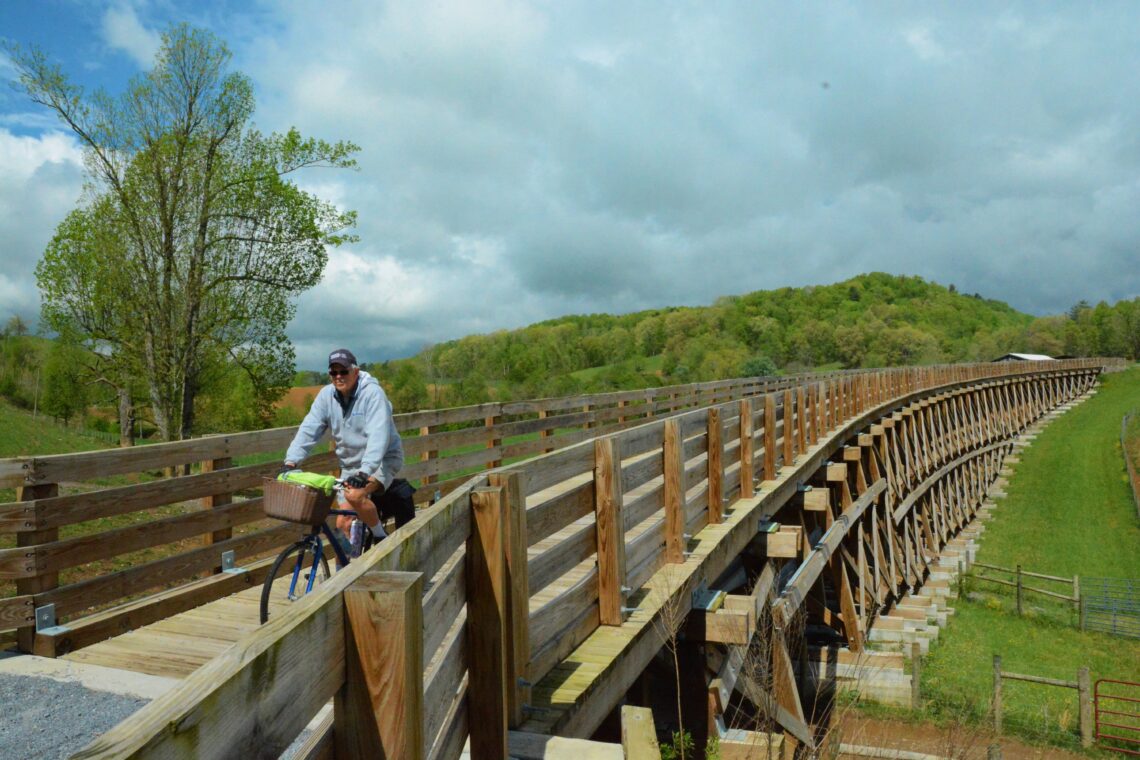 A great trail with spectacular scenery explain why the Virginia Creeper became a Rail Trail Hall of Famer.

Bicycle trails are good for business. They attract restaurants, brewpubs and retail shops catering to those who walk or pedal for fun, exercise, and health. When trails connect centers of employment, recreation, education, and culture, they also generate residential development aimed at people who increasingly prefer active transportation to fighting traffic. And when trails are extended and linked with one another, they expand tourism revenue from a growing breed of vacationers who want to get out of their cars and experience places at a more leisurely and enjoyable speed.

As trails succeed, they increase business activity, employment, wages, property value, income and, importantly, tax revenues in a self-reinforcing upward spiral. Specifically, trail improvements boost trail use which grows trail-adjacent businesses and property investments which, in turn, expand tax revenues and create public support for further trail improvements. By riding the Virginia Creeper Trail in 2018, my wife and I got a first-hand look at this virtuous cycle.

In addition to spa treatments, golf rounds, and theater performances, the Martha Washington Inn will shuttle you and your bike to the far end of the Virginia Creeper Trail, allowing a 34-mile ride back to this historic hotel in Abington, Virginia. The ‘Martha’ and many other local businesses are wisely capitalizing on one of the country’s most scenic rail trails and a well-deserved honoree in the Rail Trail Hall of Fame (Traillink 2018). Bike shops, brewpubs, restaurants and all forms of lodging have gravitated to the Virginia Creeper both in Abington and Damascus, the aptly-nick-named “Trail Town USA” at the trail’s midpoint. Economic studies have documented that this apparent success story in the heart of the Blue Ridge Mountains is real.

The steam engines that originally used this rail line literally crept up the long, uphill slope from Damascus to Whitetop Station, now the southern trailhead. The grade in this section is definitely noticeable, which is why many visitors choose to shuttle rather than pedal to the top. No fewer than eight outfitters are more than happy to provide this sweat-free uphill lift. The downhill ride is both exhilarating and spectacular, passing waterfalls and crossing mountain streams as the Creeper winds through mile after mile of the Jefferson National Forest. Most riders pause at Green Cove where the original rail station still welcomes visitors with a dose of history and, occasionally, some live local music. Further downhill, it is practically mandatory to stop at the Creeper Trail Café for something cold or hot depending on the weather (Stark 2013).

Arriving in Damascus, riders can taste a locally-crafted concoction from the Damascus Brewery, linger in a cafe or stay the night at any of more than a dozen inns, cottages, or B&Bs. We chose the Damascus Old Mill Inn, which overlooks a waterfall and mill pond teaming with ducks, geese, and fishermen. The 2000-plus-mile Appalachian Trail intersects the Virginia Creeper Trail in Damascus and uses the sidewalk on the main street here before climbing back into the hills on the other side of town. Every spring, Damascus hosts Trail Days, attended by roughly 20,000 cyclists, hikers and other nature lovers hoping to catch the rhododendrons and mountain laurels at peak bloom (Stark 2013). Wayne Miller, President of the Virginia Creeper Trail Club, gives the following opinion of the trail’s importance. “Damascus is a little mill town that was saved by the trail. It was on its last legs. The old industries were shutting down. Now it supports eight bike shops that service the trail” (Stark 2013).

Heading north, the scenery changes from forests to farms as cyclists pedal the remaining 17 miles to Abington where they are greeted by a 1907 steam engine tailored to the Creeper’s tight curves, steep grades and wooden trestles (Stark 2013). On bike-friendly Pecan Street, cyclists soon enter the Abington Historic District, listed in the National Register of Historic Places. Here, the previously-mentioned Martha Washington Inn, dating from 1832, was a residence and college before becoming an upscale hotel in 1935. An 1831 building across the street became a theater in 1933 called the Barter Theatre because people could attend plays by bartering fruit and vegetables from their farms and gardens during the depths of the Great Depression. The Barter now welcomes over 120,000 visitors a year with a year-round schedule (Barter Theatre 2013). Further up Main Street, the county still dispenses justice in a courthouse built in 1869 (National Park Service 2018).

In addition to history and bike trails, Abington offers visitors other reason to hang around including a winery, brewery, art museum, craft stores, and art galleries plus several outstanding restaurants like The Tavern, serving traditional German meals in a landmark building that originally housed a stagecoach inn. Kevin Worley, Abington’s Director of Parks and Recreation, is working to get more people on the Creeper for economic as well as health reasons: “They come in to do the Creeper, then come in to do other things in town. The trail brings a lot of economic benefit to the town” (Stark 2013).

Formal economic studies support these personal observations. For his 2004 master’s degree thesis, Joshua Gill conducted an extensive survey of Virginia Creeper users. The survey responses allowed him to estimate the percentage of users who travel here primarily to ride this rail trail. The survey also distinguished between day users and overnight users. For example, of the 39,367 primary-purpose, non-local trips, 33,642 were day trips and 5,725 were overnight trips. The overnight trips involved lodging revenue as well as higher per-trip expenditures on food, bike rentals, and shuttles. Consequently, primary-purpose, non-local overnight users were estimated to spend roughly four times more than their day use counterparts. As a bottom line, Gill calculated the Creeper’s total economic impact at $1.6 million per year when applying a multiplier to direct expenditures (Gill 2004).

A 2007 report estimated that 106,000 people used the Virginia Creeper in the study year. The authors calculated that the $1.6 million in total annual economic activity supported 27 jobs and $610,000 in labor earnings. That represents a sizable portion of the local economy considering that Abington had a population of 8,186 and Damascus was home to less than 800 people (Bowker, Bergstrom & Gill 2007).

In 2011, a team from the Virginia Tech Economic Development Studio surveyed local businesses as well as trail users. More than half of the commercial respondents reported that trail use generated over 61 percent of their income. The report concluded that Damascus owes its economic success to trail-based tourism, with many local entrepreneurs naming the Virginia Creeper as a motivation for opening a business here (Economic Development Studio 2011).

As shown by these studies, despite the disappearance of the steam locomotives essential to bygone industries, the Virginia Creeper is still an economic engine.