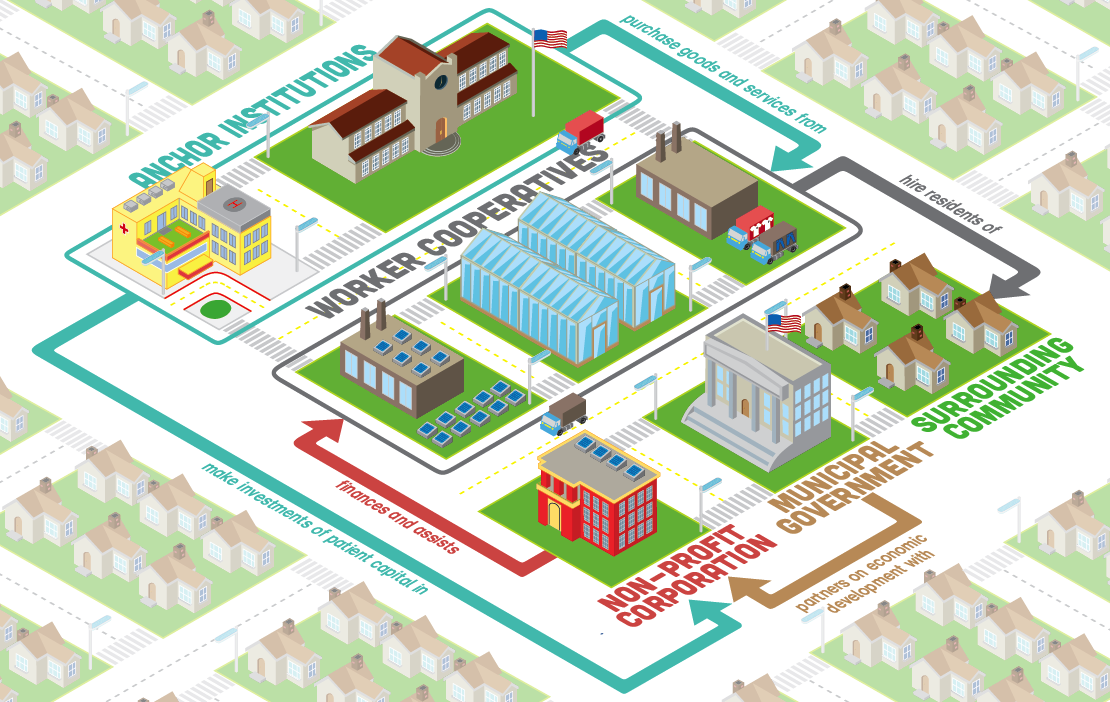 Cleveland, Ohio is not the first city that comes to my mind when I hear the word “ecocity”. Where are the natural armatures, the glass high rises gleaming with sunlight, the self-driving tesla, the transit-oriented development, or the signs advocating for carbon neutrality? Cleveland isn’t in Southeast Asia or Northern Europe or on either of the U.S. coasts. Cleveland is, however, one of the top ten cities in the United States with the highest rate of concentrated poverty due to the decline of large-scale Fordist industry in the 1970’s and 1980’s. Cleveland is also both racially and economically segregated. Nothing about Cleveland screams “ecocity”. But what if this often ignored, major Metropolis in America’s Midwestern region actually served as an example for what an “ecocity” could be and what an “ecocity” could do? Figure 1.1: the Greater University Circle neighborhood is surrounded by wealthy service providers, as seen in the photo.

What I’m referring to is the “Cleveland Model”, which birthed the Evergreen Cooperative system. The “Cleveland Model” sprouted in the Greater University Circle region of Cleveland in retaliation to many of the factors discussed above: concentrated poverty almost 30% the United States level, low high school graduation rates, and high business closure rates. Greater University Circle was an area within an already struggling Cleveland that lacked hardly any type of social or economic mobility. It was an area that just seemed to be getting poorer and poorer, despite the fact that it was directly adjacent to some of the wealthiest service providers in the Cleveland area, all of which hired 40,000+ employees that commuted in and out of University Circle, taking the capital and wealth with them.

The “Cleveland Model” decided to utilize these nearby hospitals, universities, and other service providers as foundational “anchor” institutions for its business model; institutions that were “too big” to falter or leave during a financial crisis and would be willing to support the Greater University Circle Initiative. Thus, the Initiative began as a mode of providing market-rate services to these anchor institutions, with a mindset to grow from there.

The “Cleveland Model” has a “three-legged stool” strategy: leverage the purchasing needs of the anchor institutions, develop a network of community-based cooperatives owned by residents geared towards “procurement” needs and take advantage of emerging opportunities in the green economy space. The “Cleveland Model” realized that it leverages the money already being spent by these anchor institutions on goods and services and funnel this money back into the local economy.

However, what seems to be truly groundbreaking about this for-profit model is that it’s “cooperative” based and “green”. The cooperative aspect works like this: after a six-month probationary period, workers and residents in the Greater University Circle neighborhood become investors in the company at a payroll reduction of $0.50/hour over three years and are then able to complete total ownership stake at $3,000. Therefore, after eight years, workers can earn a potential equity stake of $65,000. Once ownership is gained, workers become decision makers in the cooperative simultaneously, deciding how the profits are spent and what innovations should be followed. This cooperative model ensures that all of the profits directly benefit the immediate community of Greater University Circle, creating a system of wealth and equity. This system is built around the economic idea of the multiplier effect; that profits gained in the cooperative will be spent in the local community, which will eventually translate to other members of the community, which will lead to increased spending, eventually building more and more wealth and capital within the region. Figure 1.2: Structure of “The Cleveland Model” Evergreen Cooperative Laundry has the smallest carbon footprint of any industrial-scale laundry in northeast Ohio, only using 8/10ths of a gallon, compared to the usual 3 gallons, to clean 1 pound of laundry while Evergreen Energy Solutions is a leader in Ohio’s weatherization programs, ensuring year-round employment. Concurrently, Green City Growers operates the largest urban greenhouse in the nation, using only 1 gallon of water per head of lettuce compared to 40 gallons required for field growing, where 80% of the water is captured from rains or melting snow. Green City Growers also produces 3 million heads of lettuce and 300,000 pounds of fresh herbs annually, selling to local small-scale and large-scale markets, hiring refugees and formerly-incarcerated persons. While the “Cleveland Model” and Evergreen Cooperatives have both met some obstacles on their pathway to community wealth building, including worker disempowerment and lack of profits in the initial stages, I think the “ecocity” movement could potentially learn a lot from observing the “Cleveland Model”. For starters, the Evergreen Cooperatives were built from the ground up, with constant resident input and constant goal setting to ensure that funds stayed within the community. On that note, residents are still involved, and the leaders, of the Cooperatives’ decision making processes.

The “Cleveland Model” always kept in mind one important factor: humans. Equity, capital, and environmental progress were never deemed as separate entities, but as one “model” with many different solutions. Environmental justice is intertwined with concentrated poverty and social equity, and the “Cleveland Model” has illustrated that all can and should be achieved simultaneously.

Finally, Evergreen Cooperatives has proven that the definition of what it means to be an “ecocity” has moved far beyond the zero-carbon footprint, architectural marvels that the term was first associated with. While perhaps sharing the same goals as the initial definition, I think that the “Cleveland Model” has shown that the path to creating an “ecocity” does not have to simply be building a new, cleaner city from scratch, but improving on the equity and sustainability of cities that already exist, and are often ignored. These are the cities with high amounts of concentrated poverty and environmental hazards, and if the “ecocity” movement ignores them, then it is simultaneously ignoring what it means to be “sustainable” in the first place.

Nils is a sophomore at the University of California, Berkeley. His interests lie in exploring city planning and government work through a sustainable approach and hopes to one day go into land use law and planning. While he still sometimes harbours dreams of writing the next Great American novel, Nils cannot wait to one day spend his time crafting zoning laws based on equity, racial, economic, and environmental justice.