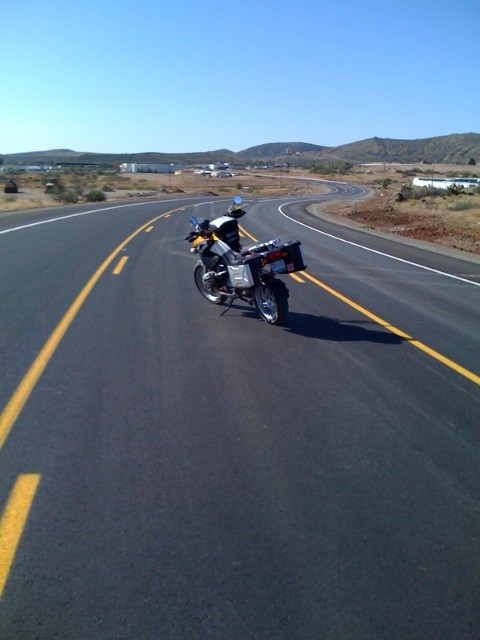 First things first: Here is a recent photograph of the Arcosanti Road leading from Cordes Junction, AZ toward the site of Arcosanti, the urban laboratory begun by Paolo Soleri back in 1970. For anyone who has visited this ecovillage, driven down its historic gravel road anytime in the past 50 years, the scene is startling. We didn’t ask for it…. Of course, this is only the first mile; Arcosanti Road reverts to the gravel surface we know and love for its final two miles. But it is the start of something, part of a new federally-funded traffic interchange on I-17. America builds roads! And Interchanges! And pays for them. So you know, it cost $51 million of your Federal tax dollars to fund this one.

$51 million to handle massive car traffic three miles from an urban laboratory that intends to do away with the need for cars altogether. The irony is not lost on us. Among the issues it brings up: the entire interchange and the cars it serves all depend on OIL.

America’s buildings use about 48% of all the energy produced by or imported into this country – much of it oil – in their construction and maintenance: heating, cooling, lighting. Their presence on the planet contributes almost exactly that same percentage of carbon to the atmosphere, too.  The oil burned in vehicles needed to travel the miles between all those buildings is about 27% of the country’s total energy budget; and there’s all that time spent on the road.

But this is about roads themselves. The way in which we continue to design these ribbons through the natural landscape results in their requiring quite a bit of oil for their construction. We make around 90% them out of asphalt: oil. Here we’re not just speaking of The Dwight D. Eisenhower Defense Highway System – interstates like I-17 in Arizona, I-80 across the whole continent – that’s oil, of course. We’re speaking too, of local roads and streets, the physical network that separates work from home for most people. Around Phoenix, AZ for instance, such roads are plentiful: an industrial grid laid over 900 square miles of thinly-settled suburban landscape. Roads near Arcosanti – Route 69 to Prescott; 89A to Jerome – are nostalgic roads, recalling in their closeness to the very nature they interrupt, a simpler era; fewer people, fewer cars, when to drive was a pleasure; not as it is now, a daily necessity (unless you’re on a motorcycle, like in the photo, but that’s another story). Newly-paved Arcosanti Road, a mile long, lies somewhere between the grid and nostalgia.

America’s first roads were waterways. In part this was because vegetation on land – in the East, particularly – was so thick. In the early 1800’s when Henry David Thoreau was walking and writing about New England, it was a trip on foot of more than two days through thick forests just to get the 20 miles from Concord MA to Boston. The Scotsman James Loudon Macadam was inventing his civilization-altering, hard-packed, interlocking crushed stone material – Macadam, a derivative of which was used on the one-foot-thick sub-surface roadbed of the Arcosanti Road – around that same time, 1820.

The first real paved American road, coast-to-coast, was the Lincoln highway, nearly 100 years later, early in the twentieth century. This road was surfaced mostly with concrete, even though asphalt roads had been in use in Baghdad since the 8th century. But oil was only discovered in America in the 1860’s, and it wasn’t until long after the Lincoln Highway had been built that anyone imagined using oil as a road surface here, as had been the practice in the Middle East for a millenium.

Taking the narrow view, as a fresh surface that tempers rock and sand and soil, making it safe for wheeled vehicles to roll uninhibited over the planet, asphalt has no equal. Smooth, dark, quiet, easy to lay down, no annoying expansion joints… if you are an enthusiast of speed, nothing compares.

Widen the focus: the asphalt’s useful life is hard to measure. The Asphalt Paving Association says it should last for 15 years. But because of the nature of regional soils, the freeze-thaw cycle throughout much of the country, and the decay brought to every human-made surface by new levels of rain runoff and ultraviolet sunlight, most roads are resurfaced with new asphalt every few years.

Wider still: asphalt is OIL, and there’s our problem. According to the US Department of Energy, America uses around a million barrels of oil per month for asphalt/road building alone. This figure has held steady for the past twenty-five years. The price of oil, of course has climbed over that time from around $20 per barrel to its current level, hovering near $58 per barrel today, having reached a high of $160 just a decade ago. Remember that!? Plus, of course, oil is absolutely poison to organic life.

So when we are thinking of “sustainability” here is a rule of thumb: If there needs to be a road to it, a road made of oil, it’s not sustainable. This is a risky business. Across America we burn oil to construct and heat our buildings, we burn it to produce electricity to light and cool them, we use it to manufacture and power cars to access them – electric cars, too – and we even make roads themselves out of the stuff. Oil is at the core of every decision that we make to answer the question “How shall we live? And it is now too important an issue to be left to politicians or diplomats or oil company executives. It is an issue for all of us. How can we imagine a future that doesn’t require that we spread oil out on the ground just to get from one place to another?  Ecocity Builders are working on that…

Jeff Stein is currently President of the Cosanti Foundation, building Arcosanti, Arizona, and keeper of Paolo Soleri’s architectural and philosophical legacy. Jeff lectures internationally and presents on special invitations such as Keynote at the 100th Anniversary Conference celebrating the founding of Tel-Aviv, Israel.