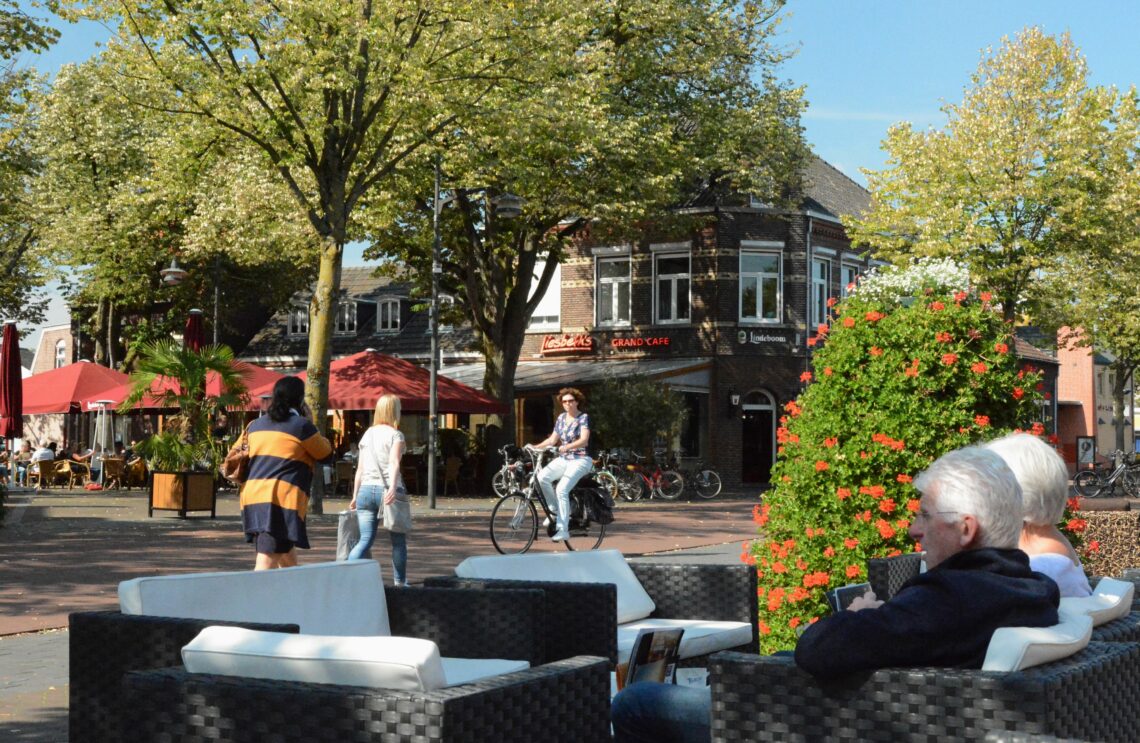 Horst aan de Maas lies in the Province of Limburg roughly 85 miles southeast of Amsterdam.  Since 2001, 16 separate communities have merged to form the consolidated municipality of Horst, creating a combined population of 42,000 people. The European Commission recently chose Horst and Cornella de Llobregat, Spain to share its 2019 European Green Leaf award for excellence in sustainability. In explaining its decision, the Green Leaf jury highlighted Horst’s inclusive urban strategy and extensive citizen engagement in the areas of climate action, mobility, water management, air quality and waste management. The jury was particularly impressed that Horst was striving to become the healthiest region in Europe by 2025 (RPS 2018).

Ecocity Snapshots: Learning from Europe’s Greenest Places” is Ecocity Builders Vice President Rick Pruetz’ latest book, profiling 19 cities and their efforts to rebuild in balance with nature. We are publishing each chapter on Ecocities Emerging to make this important work available online. Visit Rick’s page for all chapters posted so far or get the paperback at Amazon.

Horst fights climate change largely by switching to renewable power, particularly in its glass greenhouses which accounted for 42 percent of the municipality’s energy consumption in 2014. Since then, many of Horst’s greenhouse operations have converted to geothermal systems, often achieving remarkable reductions, like a 95 percent decrease in the CO2 emissions produced by pepper cultivation. In the four year period between 2011 and 2015, renewable heat from geothermal increased by 261 percent and electrical energy generation from renewable sources rose by 388 percent. Kronenberg, one of Horst’s 16 villages, is aggressively installing solar and other renewables in order the reach its goal of becoming the first energy neutral community in the Netherlands before 2030 (Horst 2017). 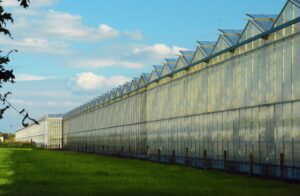 Before the conversion to geothermal, greenhouses accounted for 42 percent of Horst’s energy consumption. 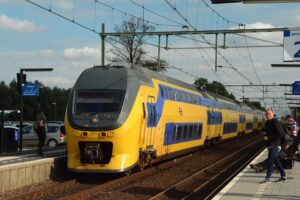 Bicyclists can use the Greenport Bikeway to access a train station serving the entire European rail network.

Horst is improving its already impressive green structure. Over 80 percent of all residents live within 300 meters of green space. Currently, Horst has joined with the Province of Limburg, the Limburg Water Board and an adjacent municipality in completing 13 environmental restoration projects with a total price tag of over $20-million dollars, an effort that drew special recognition from the expert panel for the European Green Leaf award. Most of these projects involve returning altered streams to a more natural state in order to improve water management, recreate original watercourses, expand recreational opportunities and improve stream ecology for fish and other species. Most of these projects also include hiking trails and bike paths within greenways that provide connectivity for wildlife as well as human mobility (European Commission 2018; Horst 2017; Maasgaard 2018). 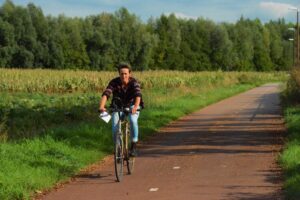 Cyclists can also choose to commute from Horst to Venlo on the Greenport Bikeway.

With help from the European Union, Horst and its partners are also preserving and improving the 3,459-acre Mariapeel bog, the municipality’s largest Natura 2000 site and one of Europe’s best remaining examples of the high moor ecosystem. This complex project aims to restore water levels and natural vegetation while also protecting the viability of certain farming activities while providing hiking and bicycling trails for health and recreation (Horst 2017; Maasgaard 2018).

Horst works to improve biodiversity in general and the future of bees in particular. Bees are especially important to farming communities like Horst, which is responsible for 80 percent of all the roses grown in the Netherlands. Horst has adopted the role of bee ambassador, hosting bee symposiums and operating a bee farm where visitors can learn all about bees, their role in pollination and their significance to the agricultural economy. Horst also delivers native plant material free of charge to private property owners interested in restoring the original landscape as another means of supporting biodiversity (Horst 2018). 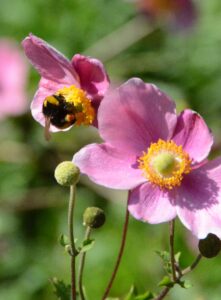 One of the workers at Horst’s bee farm.

Horst aims to improve its air quality partly by improving intensive livestock farming conditions. Using $1.8 million from the municipality alone, obsolete animal structures were dismantled. While this reduced the municipal population by thousands of cows, pigs and chickens, Horst welcomes new livestock facilities as long as they are designed to minimize air pollution and other environmental impacts. As in non-agricultural communities, Horst also seeks to improve air quality by transforming its transportation sector. Leading by example, Horst plans to have converted its public transportation fleet entirely to electric vehicles by 2020. To improve data collection and also generate citizen engagement, Horst installs particulate matter sensors in the gardens of interested private property owners. These efforts are producing results: between 2012 and 2016, particulate matter readings dropped by roughly 18 percent (Horst 2017).

Horst also excels at managing noise levels. It partners with railroads to insulate houses affected by train noise and maintains permanent sound meters in town centers accessible to police and pub owners. Any firms wanting to locate within certain industrial zones must first conduct an acoustic study to verify that they will adhere to noise limits. Horst partners with Limburg to enforce noise limits in two official quiet areas, including the Mariapeel bog natural area described above (Horst 2017). 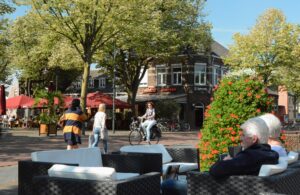 The car-free center of Horst is a place to be.

Year after year, Horst produces the lowest per capita residual waste generation ratio in the Netherlands. Horst has also been declared the Dutch waste separation champion three times. Horst modestly explains that reuse and recycling comes naturally in an agricultural community. But in reality, this municipality has been extremely proactive. Residents separate vegetable and fruit waste in small containers that the municipality collects twice a week in order to create ideal conditions for composting. Community organizations partner with the municipality and private firms to recycle plastic, glass and metal containers. A company here has also been piloting an innovative process for recycling diapers. Horst collects any remaining residual waste in bags that residents buy for $1.35 each, creating an added incentive to minimize disposal. The high degree of public understanding and participation is demonstrated by the fact that private citizens accomplish 90 percent of the separation process themselves. As a result of all these strategies, per capita residual waste generation in Horst has dropped by almost 90 percent. Dutch municipalities in the same category as Horst generate more than seven times as much residual waste per capita (Horst 2017).

Horst has experienced recurrent flooding and recognizes that the risks are getting worse as climate change raises sea levels and generates more intense storms. As recently as 2018, the village of Broekhuizen was threatened again by the rain-swollen Maas River which forms the eastern border of Horst. To reduce flood hazards, Horst has joined with the Province of Limburg, the Limburg Water Board, the Ministry of Infrastructure & Environment and a neighboring community on the ambitious Ooijen-Wanssum project which removes man-made obstructions and restores a former Maas riverbed. In addition to lowering the water level by widening the river, this project creates natural areas, recreational features and an improved harbor expected to generate jobs and economic development. Another project to widen the Maas by 2030 in the southeastern corner of Horst will likewise incorporate recreational features proposed by local citizens (Horst 2017).

Horst is justifiably proud of Greenport Venlo, a large redevelopment project partly in Horst. Although Greenport lies mostly in the adjacent municipality of Venlo, Horst is a major stakeholder in this venture. The portion of Greenport within Horst, called the Californie district, features geothermal-powered greenhouses topped with solar roofs. Other parts of Greenport cater to manufacturing, trade, logistics and other industries. But the highlight is the area of Greenport occupied by Brightlands, a consortium of universities, corporations and the Province of Limburg that researches improvements in health and nutrition while developing new processes for the future of sustainable agriculture and the bio-circular economy. Greenport is served by the bicycle highway discussed above and is buidling what will be the Netherland’s largest inland rail terminal when it opens in 2020. Half of the land area of Greenport is planned for nature. Other sustainability features include extensive use of solar and a planned wind farm, offering the possibility that Greenport will ultimately succeed in generating all of its energy demand on site. For all these reasons, Greenport arguably best illustrates Horst’s motto: Enterprising by Nature (Brightlands 2018; GreenPort Venlo 2018; Horst 2017).

Brightlands. 2018. About. Accessed on November 12, 2018 from https://www.brightlands.com/about-brightlands.