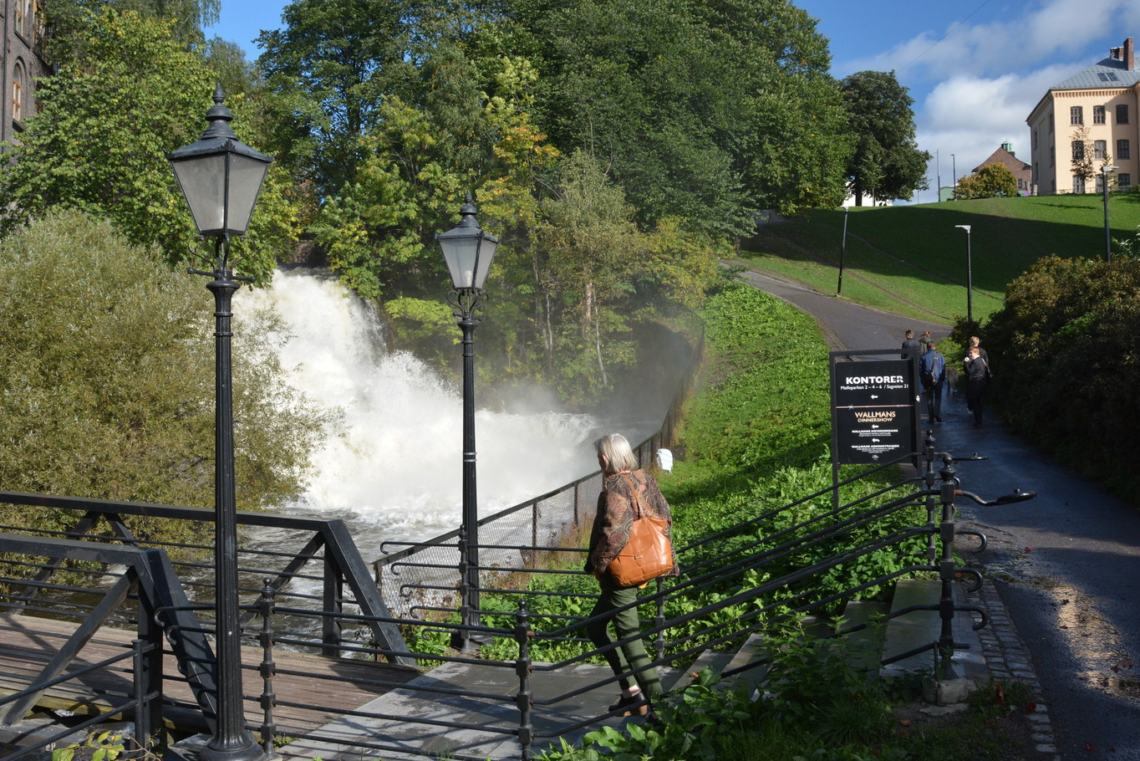 On Oslo’s green subway line, passengers board a train in the city center and step off at Sognsvann Lake to hike, bike, fish, swim or simply contemplate nature. Backpackers use the Sognsvann transit station as a gateway to the network of trails that thread through the Marka, the 301-square kilometer forested greenbelt that forms two-thirds of Oslo’s total land area. Oslo is also securing and restoring the Akerselva River corridor as it plunges through the heart of the city on its way from the Marka to the Oslo fiord. Through a succession of plans beginning with the 1917-18 parks plan, the city has committed itself to ultimately daylighting and restoring all eight of the rivers that once flowed freely to the sea. To accommodate significant growth pressure while protecting the Marka and expanding greenways, Oslo is implementing compact development citywide and creating highly successful waterfront revitalization projects. These efforts have prompted a leading expert to recognize Oslo as a good example of a biophilic city (Beatley, 2012).

Biophilic cities protect the environment and link residents with nature, an essential ingredient of human productivity, health and happiness. Oslo’s motto, “the blue and the green and the city in between”, establishes the proximity of the Marka and the Oslo fiord while suggesting that the blue and the green are just as important as the urbanized portions of the city. Statistics from Oslo’s application to the European Green Capital competition support the city’s biophilic credentials. Over 94 percent of Oslo residents live within 300 meters of greenspace. The Marka alone is home to 70 lakes for swimming, 100 rivers and lakes for fishing and 460 km of bicycle trails. Even within the developed portions of the city, roughly 19 percent of the land area is publicly-accessible greenspace (Oslo, 2008).

Oslo’s blue-green evolution did not occur overnight. The city’s first parks plan, adopted in 1917-18, envisioned radial greenways, or green fingers, following the river corridors connecting the Marka and the fiord. Subsequent plans built on that concept, calling for higher density development within centers connected by trails linking schools, sporting fields and other community facilities as well as open space and the surrounding Marka. Throughout the 20th Century, implementation of this vision was slowed by world events and local economic conditions. But over time, Oslo succeeded in largely transforming the banks of the Akerselva River from a declining industrial district to Akerselva Environmental Park, which showcases the river with greenspace, trails, new development and historic factory buildings repurposed as restaurants, studios, entertainment venues, offices and housing (Jorgensen and Kine, 2012). Figure 13-2: Oslo has converted the banks of the Akerselva River from an abandoned industrial zone into a major arts and recreation corridor.

Oslo has low carbon emissions per capita because this city generates almost all of its power hydroelectrically and uses that renewable energy to fuel its highly-developed metro rail public transportation system. In 2005, Oslo adopted a climate and energy action plan aimed at reducing greenhouse gas emissions 50 percent by 2030 as compared to 1990 levels. The ten-point plan for reaching that goal included a requirement that all new municipal buildings comply with passive/low energy standards and that that fossil fuel heating be completely eliminated in all municipal buildings by 2020. The plan also calls for enlargement of Oslo’s district heating network in conjunction with an expansion of the waste-to-energy plant and installation of a new bioenergy plant (European Commission, 2009; Oslo 2008).

Despite having the fastest growth rate of all European capitals, Oslo has maintained its enviable relationship with nature by promoting compact, infill development. Between 2002 and 2006, 80 percent of all new development occurred on previously developed land and brownfield sites (Oslo, 2008). Special attention has been focused on three waterfront areas no longer needed for shipbuilding and other port activities, collectively known as Fiord City. These areas are connected by Harbor Promenade, a nine-kilometer interpretive trail that invites pedestrians and cyclists to learn the history of the waterfront, including the Akershus Fortress, the medieval castle overlooking Fiord City.

Located toward the western end of the Harbor Promenade, the Aker Brygge district now occupies the site of a ship building firm that closed in 1982. This redevelopment project, built in the 1980s and 1990s, was recognized by urban guru Jan Gehl for its judicious mix of office, residential, retail and entertainment uses. Gehl adds that although the density is high, “…it’s the right kind of density…” thanks to careful design of the buildings and public spaces, which give pedestrians endless opportunities for walking, relaxing and dining at the water’s edge (Gehl, 2010).

Tjuvholmen, the second phase of Fiord City, was once a prison island. Today it is home to several high-rise buildings including the luxurious Thief Hotel. People are motivated to cross the pedestrian bridge from Aker Brygge to Tjuvholmen by the sight of the curvilinear Astrup Fearnley Museum of Modern Art designed by Renzo Piano. Figure 13-2: Oslo has converted the banks of the Akerselva River from an abandoned industrial zone into a major arts and recreation corridor.

Bjorvika, the third phase of Fiord City, will ultimately locate 20,000 work sites and 5,000 residences between the central train station and the waterfront. Parks and other public spaces will eventually cover 40 percent of Bjorvika. The marble-clad Opera House, which serves as the focal point for this district, features a sloping roof that people can climb for a 360-degree panorama of, quite-fittingly, the blue, the green and the city in between.

Chapter 13: Oslo, Norway: The blue and the green and the city in between