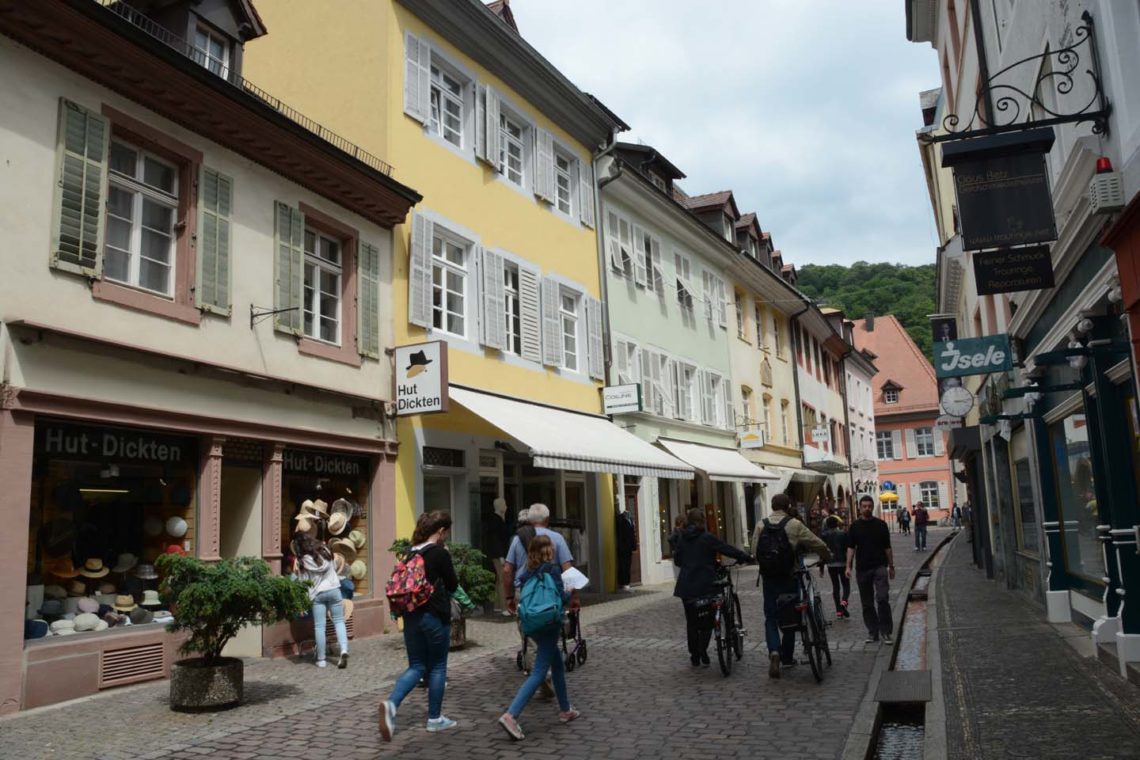 Freiburg deserves its “Green City” brand. This 220,000-person city on the edge of the Black Forest in southeastern Germany has consistently been in the forefront of all things sustainable, from renewable energy and eco-neighborhoods to alternative transportation and preservation of the natural environment. By building a robust economy with the help of green institutes, firms and jobs, Freiburg also exemplifies the motto of “doing well by doing good”.

In 1975, protests at the construction site of a nuclear power plant near Freiburg are often credited with giving birth to the green movement. Following the 1986 Chernobyl nuclear disaster, Freiburg dedicated itself to a solar future. In 1992, Freiburg was named Germany’s Environmental Capital. Freiburg has consistently won similar recognition ever since, including the European Public Transport Award, the German Solar Award and the Federal Awards for Sustainability in Urban Development (Freiburg, 2008).

Freiburg is growing its reliance on renewable energy including hydropower, biomass, biogas and solar. As a unique illustration, Freiburg has seven small hydroelectric plants partly fed by the “Bachle”, tiny water canals restored to streets in the pedestrian zone of the historic city center. Leading by example, Freiburg trams are powered entirely by renewable energy from hydroelectric, wind and solar sources (Freiburg, 2011). As of 2009, over 1,000 photovoltaic collectors covered the rooftops of Freiburg’s public and private buildings, annually generating 15 megawatts, enough to power 5,500 two-person households for one year. Perhaps the most famous symbols of “Solar City” Freiburg are the photovoltaic array atop the soccer stadium and Heliotrope, the completely solar-powered 1994 house that rotates for maximum sunlight capture. Not content with these accomplishments, Freiburg aims to put solar collectors on every home in the City. In fact, if solar panels are not installed on a new dwelling, the City requires that the roof at least be built to accommodate solar photovoltaic or thermal systems in the future (Freiburg, 2011).

The solar industry is also key to Freiburg’s economic development strategy. Since 1981, Freiburg has been home to Europe’s largest institute for applied solar energy research, with 800 employees consulting worldwide. This institute as well as other sustainability organizations support Freiburg’s claim as the foremost center for solar energy knowledge transfer. In response to this green industry strategy, the Freiburg region now has 2,000 solar enterprises generating 650 million euro per year and employing 12,000 workers.

As an additional economic boost, an estimated 25,000 “specialist tourists” visit Freiburg each year to learn about its solar and other sustainability successes (Freiburg, 2011). These successes add luster to Freiburg’s Solar City and Green City brands and create a positive feedback loop, attracting potential innovators from around the world who often decide to move here, consequently strengthening green industries and building support for sustainable public policies (Rohracher and Spath, 2012).
Freiburg is committed to technologies that increase energy efficiency, particularly cogeneration plants that produce electricity as well as heat. A total of 140 cogeneration plants produced roughly half of the City’s energy needs as of 2009. The cogeneration plant in Rieselfeld uses natural gas for district heating and electricity. The Vauban ecodistrict takes the extra step of powering its cogeneration plant with wood chips (Freiburg, 2011).

Freiburg’s Land Use Plan fights sprawl by promoting “inner development”. Since 1980, over half of Freiburg’s residential construction has been on infill sites, particularly underutilized industrial areas and former military bases. The Land Use Plan 2020, adopted in 2006, reduced the land designated for development by 30 hectares (Freiburg, 2008). A sophisticated land use analysis estimates that up to 95 percent of the development demand projected to the year 2030 can be accommodated within the City’s current boundaries (Freiburg, 2011). Freiburg’s most famous example of inner development is the transformation of the Vauban district from military uses to a compact neighborhood of predominantly four-story buildings. Residents with cars can drive on the traffic-calmed streets of Vauban for passenger pick-up/drop-off and deliveries, but parking is confined to structures at the perimeter of the district. As a result, Vauban is by far Germany’s largest car-free project (Berrini and Bono, 2010). Instead of owning cars, residents here are encouraged to walk, bike and use a tram line directly linking Vauban with downtown. In fact, only 82 residents per 1,000 own cars in Vauban as compared with 430 cars per 1,000 residents in Freiburg as a whole and 550 cars per 1,000 in Germany (Medearis and Daseking, 2012).

About 240 residences in Vauban use passive solar and the rest comply with low energy construction standards that consume only 65kWh per square meter per year. A carbon-neutral cogeneration plant supplies heating as well as electrical power to 700 households and ubiquitous rooftop photovoltaic solar collectors create enough electricity to power 200 dwelling units (Freiburg, 2011). Perhaps most important, Vauban is a pleasant place to live, with gardens and landscaped courtyards plus tree-lined streets where people can easily walk or bike to schools, shopping, entertainment venues, community centers and nearby tram stops.

Rieselfeld is another model ecodistrict. Used for surface wastewater spreading until the 1980s, this 70-hectare site has become home to over 10,000 residents in buildings with optimal solar orientation served by a district heating system. As in the Vauban, Rieselfeld is linked to downtown Freiburg by a direct tram line and the Freiburg bicycle network. A soil filter treats all rainwater before it flows into the western half of Rieselfeld, which has become a 205-hectare nature reserve and European bird sanctuary, providing habitat for white storks, stonechats and red-backed shrike (Freiburg, 2008; Freiburg, 2011).

In the 1960s, Freiburg adopted an integrated transportation planning approach that includes pedestrians, bicyclists and public transit. More than 80 percent of Freiburg residents live within 500 meters of a tram stop. Remarkably, Freiburg trams and busses carry 200,000 passengers per day within a region of 250,000 people (Freiburg, 2011).

In 1973, Freiburg transformed much of its downtown to a pedestrian zone where private vehicles are limited to deliveries and local residents. In the 1990s, Freiburg changed the speed limit on non-arterial streets to 30 kilometers per hour which greatly improved safety while reducing traffic noise and pollution. Today, 90 percent of Freiburg’s residents live in neighborhoods with 30 kph speed limits. Freiburg’s 420-km bike network incorporates 170 km of bike paths, 120 km of forest/service roads and 130 km of bike-friendly streets with 30 kph speed limits. (Freiburg, 2011). As a result, 30 percent of all Freiburg trips are done by bicycle and another 15 percent occur on foot (Medearis and Daseking, 2012).

Freiburg owns almost one third of the land within its borders and of this amount, more than half is protected from development by some form of nature designation (Medearis and Daseking, 2012). At 5,139 hectares, Freiburg owns Germany’s largest communal forest. The eastern portion of the city forest features the coniferous trees of the Black Forest while the lowland portions to the west are called Mooswald or moss forests composed of deciduous riparian woodlands. Roughly 90 percent of the forest is in natural conservation and almost half is designated as Natura 2000. Immediately abutting downtown, residents and tourists can easily spend a few hours or a few days exploring the forest’s 450-km trail network (Freiburg, 2011).

From a Freiburg bus stop, skiers, bicyclists and hikers can transfer to a gondola for a ride to the top of Schauinsland Mountain, one of the highest peaks in the Black Forest. Schauinsland is famous for the wind-twisted trees found in these high-altitude pasturelands which now serve as a cultural landscape. Freiburg uses environment-friendly management practices here to protect habitat for lynx, chamois, three-toed woodpeckers and over 120 endangered plant and animal species (Freiburg, 2011). Tuniberg is Freiburg’s own vineyard district, capitalizing on a Mediterranean climate and rocky terrain to produce a Burgundy-style wine since the Roman era. With assistance from the Freiburg Environmental Protection Office, vintners here have been switching from industrial farming habits to nature friendly techniques including the elimination of hazardous pesticides. As a result, endangered lizards, birds and insects are making a comeback here (Freiburg, 2011).

Although perhaps not as explicit as in some European cities, Freiburg’s open spaces form a green structure. Roughly 500 hectares of green areas link the heart of the City with a surrounding green belt (Freiburg, 2008). On a pedestrian bridge from the downtown pedestrian zone, walkers can easily access a labyrinth of trails in Schlossberg, the green corridor east of the City. The green belt encircling Freiburg incorporates portions of the Black Forest, Schauinsland Mountain, Mooswald, the Rieselfeld nature reserve and the vineyards of Tuniberg as well as smaller green spaces like Seepark, created for a 1986 garden expo, and Mundenhof, Freiburg’s wildlife and nature park.

Freiburg understands that public involvement is important to achieving its sustainability goals. Well-informed citizens and experts routinely conduct lively debates at community meetings and events (Rohracher and Spath, 2012). Roughly one quarter of Freiburg residents participate in organizations dedicated to planning, environmental protection and community improvements. For example, 50 schools, churches and other groups have become stream sponsors, which often involves the removal of invasive species and the restoration of native aquatic habitat (Freiburg, 2011). Through engagement, Freiburg encourages citizens to take pride in the City’s alternative transportation, renewable energy and species preservation accomplishments while motivating them to build an even greener green city.